Arundel Wrighte was the Deputy Postmaster at Launceston in the early 1830s and married Frances Upton on 3 January 1832. He owned a ‘much-admired Villa ... which, for respectability of situation, and beauty of prospect, cannot be surpassed’ (Launceston Advertiser, 24 September 1835), and sold some of the grounds in September 1835.

One year later Wrighte obtained a two-year leave of absence from his position at the post office. The news was received badly by the local community. But he was not a popular figure. ‘Has that man even deserved by his common deportment – the respect of the population? Is it not true that more fault has been found with Arundel Wrighte in his public character, by the public, than of any other public servant – or of the whole of them united?’ (Cornwall Chronicle, 22 October 1836).

Wrighte’s replacement, Mr St John Browne, was to be paid a salary of £200 per annum. This was only half the salary that had been paid to Wrighte – and Wrighte was to receive the other half ‘while attending to his private speculations at Port Phillip.’ (ibid.) In December 1836 Wrighte chartered a 114-ton schooner (reported as Lowstoff, registered with Lloyd’s as Lowestoft) under Captain Francis to carry his family and 600 sheep to Port Phillip. 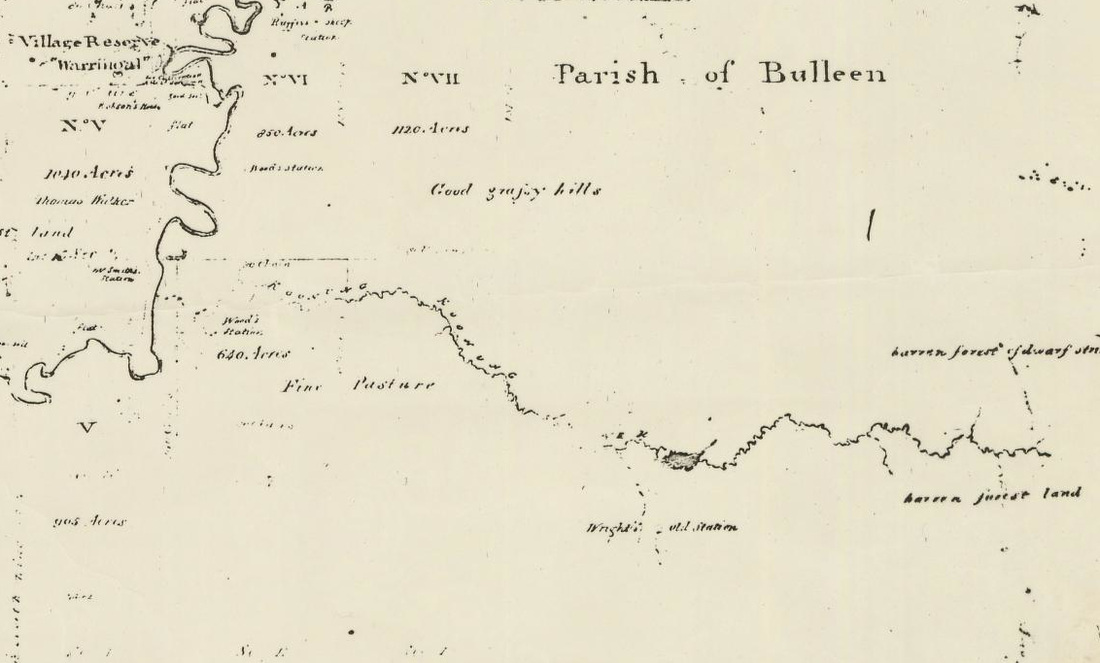 Part of Hoddle's 1837 plan.
The Governor of New South Wales initially tried to prevent settlement at Port Phillip and refused to recognise John Batman’s treaty with the Wurundjeri. Likewise Wrighte had no legal claim to the land he occupied. Correspondence with the police magistrate in October 1837 shows that government authorities threatened to pull down Wright’s house and he asked to be allowed ‘to remain in it unmolested until my leave of absence from my Office, granted me for service, has expired.’ (PROV, VPRS 4, P0000, 3).

Back in Launceston there was further outrage in May 1838 at the suggestion that Wrighte would return to his position at the post office. The community preferred the service delivered by St John Browne. In the next month Wrighte’s mansion and grounds in Launceston were sold by order of the mortgagee. In November 1838 St John Browne’s appointment as Postmaster, in place of Wrighte, was confirmed.

In Port Phillip, Wrighte interacted with native Australians. ‘In the last week of July 1840 ... Robinson ordered the Boonwurrung clans to assemble at Arundel Wright’s Beaudesert pastoral station at Nunawading, where the Woiwurrung were encamped.’ (A bend in the Yarra, 26). The native Australians lost their land and squatters in Port Phillip were gradually squeezed, by regulation and land sales, into smaller areas. In June 1849 Wrighte successfully applied for a pre-emptive lease on ten lots of 640 acres each in an unnamed parish East of Elgar’s Special Survey. In 1851 he was able to purchase 315 acres.

From Beaudesert at Nunawading (now Box Hill) in January 1858 Wrighte reported a bushfire that burnt out several properties in the area. He estimated his own loss of a large barn, a stack of hay and large part of a fine orchard at £500.

Arundel Wrighte died, aged 83 years, at Beaudesert in 1887 and was buried at Box Hill Cemetery.