Koonung Cottage is situated on part of Crown allotment 70 in the Parish of Nunawading, County of Bourke. James Cousens purchased Crown allotments 69, 70 and 71 on 25 October 1855. The sale was held at the auction rooms of Tennent & Co. in Collins Street, Melbourne. Attendance at the auction was unusually small; this was attributed to a severe thunderstorm over the city.

Lots 69 (107 acres), 70 (146 acres, one rood) and 71 (159 acres, one rood) were described as country lots. They were part of a group ‘between nine and twelve miles eastward from Melbourne, on and near the main road to Yering, and lying between the parishes of Bulleen on the north and Mulgrave on the south’ (Victoria Government Gazette, 18 September 1855, 2359). Cousens paid the upset price of £1 per acre for lots 69 and 70, and 21s per acre for lot 71. (There are four roods in an acre and twenty shillings in a pound.) Find out more about the Cousens family.

Neighbouring land was purchased:
•   To the east, across Surrey Road, by Patrick Riley.
•   To the west, across Middleborough Road, by Thomas Toogood and John Arthur Skinner.
•   To the south, across Springfield Road, by William Clisby, William Hedding and William Williams. 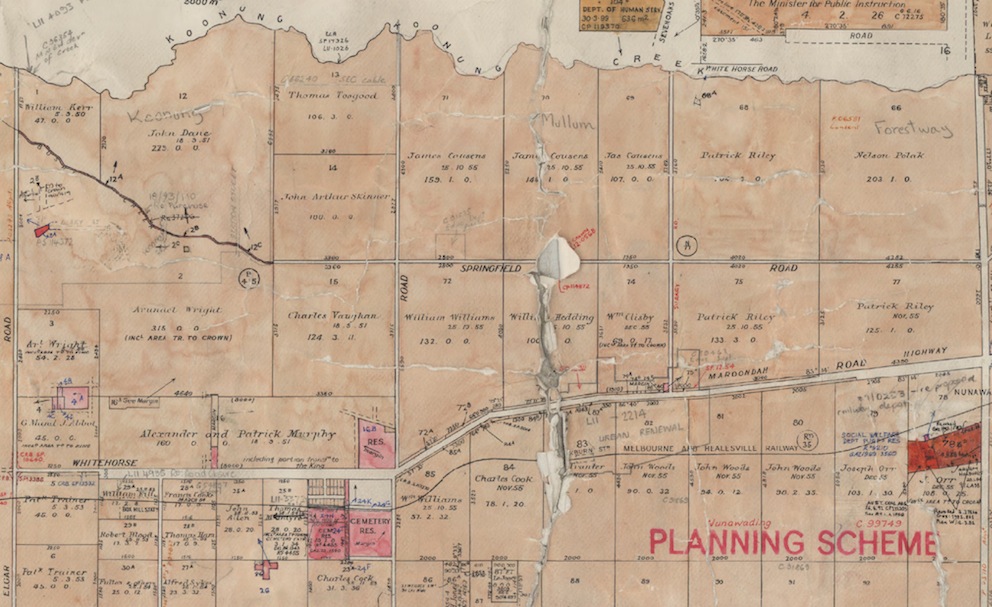