Rate books show James Cousens’ house and land* occupied by William Redmond from 1867-70; farmer Thomas Brown from 1874-77; and farmer Andrew Kane/Keane from 1878-82. (* The location is given variously as Whitehorse Road, Koonung Creek and Springfield. James is referred to as James Cousins, Joseph Cousins, Joseph Cousens and Cousins. In 1882 the owner is listed as Mrs Cousins.)

Tom Petty, a Doncaster fruit-grower; Thomas Lawford, a Nunawading fruit-grower; and David Abbott, gentleman of Picnic Point, Brighton, purchased approximately 162 acres, being part of Crown sections 69 and 70 on 7 March 1884. The holding was sold to Thomas Richard Burrowes Morton, a Collins Street accountant, in 1886. Thomas Morton joined the Nunawading council in 1888 and was president three times in an association lasting more than 30 years. He lived at Clonmore, Blackburn: his daughter was born there in 1893 and he died there in 1923.

Interestingly, Thomas Richard Burrowes Morton sold his land to the Freehold Investment and Banking Company of Australia on 14 July 1892, while the company was in liquidation.

The Freehold Investment Company was one of a complicated network established by Matthew Davies MLA. He was chairman of the 1887 Royal Commission into banking operations, which recommended that banks be allowed to buy and sell property. The other directors were Joseph Bartlett Davies, who was managing director and Matthew Davies’ brother; James Balfour MLC; and John Moodie.

By 1892 Victoria’s 1888 land boom was crashing. The Freehold Investment Company went into voluntary liquidation in February 1892. The Voluntary Liquidation Act 1891 (Vic) protected many companies from court scrutiny. Liquidators were often company directors and officials, and section 154 of the Insolvency Act 1890 (Vic) allowed them to make secret agreements with their creditors.

There was public uproar at information that did emerge. The Freehold Investment Company had formed subsidiary companies, such as the Blackburn & Tunstall Property Co Ltd, to buy its properties at inflated prices; it manufactured profits for balance sheets without receiving the full payment. While making losses the company took money from deposits and continued to pay an 8% dividend to shareholders, who were predominantly the directors.

Criticism was also levelled at the liquidators’ fee of £1000 each per annum during the first year of liquidation. One of the liquidators was Thomas Richard Burrowes Morton who, in addition to his civic duties at Nunawading, had been the company secretary of the Freehold Investment Company. He resigned as liquidator in December 1892.

Selling points for the estate included: 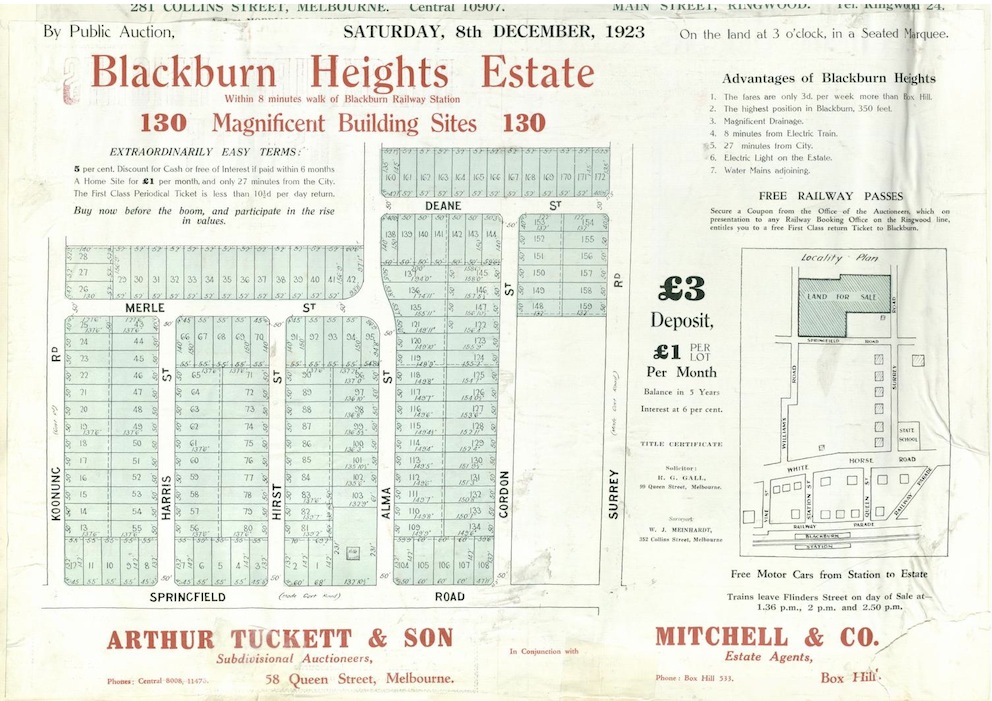 Harris sold this land in parcels over the next 2½ years. Florence Spicer, a married woman of Laburnum Road Blackburn, bought lots 16 to 22 on 31 March 1928.